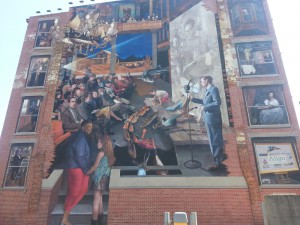 View the Interactive Guide to this Mural

The earliest concept for the mural came from the location itself, the site of the Orpheum Theater owned by Louis B. Mayer in 1907. Meg Saligman, of MLS Studio, expanded on this idea to illustrate the inside of a movie theater as a setting for the people of Haverhill’s past, present and future to be seated watching a film on a movie screen, while all around them are symbols of the city’s history.

Images in the Mural

Louis B. Mayer is featured prominently in the first row looking outward from the mural at the viewer. He is surrounded by other renowned people who have called Haverhill their home, and others who live here in the present and represent the community. These include:

A full and annotated legend of the mural design was published on the occasion of the dedication of the mural. This document serves as an artistic, historical and educational guide for decades to come. (Mural Design Key)

Additional information is available at http://teamhaverhill.org/projects/arts/esgm/

25 Essex Street (North wall)
Get directions to this location