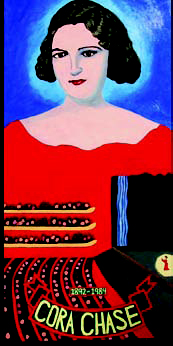 Cora Chase (1892-1984) - Opera singer, born in Haverhill MA. Cora Chase Williamson was the outstanding musical performer to come out of Haverhill. As a girl in the city’s public schools, she displayed a voice that was clearly of classical quality. Her musical studies took her to Italy, where she made her debut as a coloratura soprano. She joined the Metropolitan Opera Company in New York in 1920 and signed a recording contract with RCA Victor, after being named "America's Greatest Coloratura." Cora Chase retired from singing after her marriage to a man she met as a child at the Burnham School, New York Times writer Samuel T. Williamson.