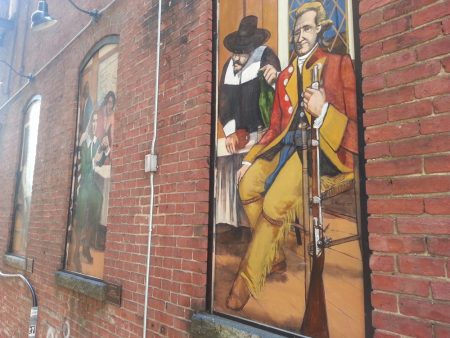 Images of a Haverhill from long ago: Three panels depicting the colonial period, including men sipping beverages in a local tavern. Mounted in the window frames between the Tap Restaurant/Brew Pub and a former Antiques Market. Artist Alan Pearsall of West Newbury, who was captivated by Haverhill’s rich history, describes the style of these murals as American Realism. He was inspired by artists such as N.C. Wyeth and Diego Rivera, whom he calls “the greatest muralist ever.”